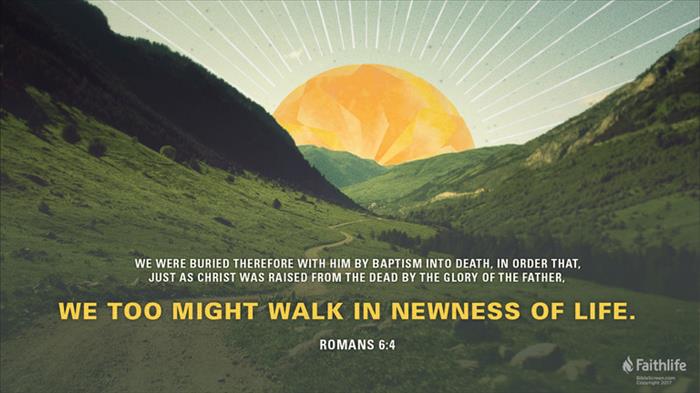 Using my definitions from my last post, I have written a paraphrased translation of Romans 6:1-14.

What shall we say then? Are we to continue in sin that grace may abound? By no means! How can we who died to sin still live in it? Do you not know that all of us who have been baptized into Christ Jesus were baptized into his death? We were buried therefore with him by baptism into death, in order that, just as Christ was raised from the dead by the glory of the Father, we too might walk in newness of life.

For if we have been united with him in a death like his, we shall certainly be united with him in a resurrection like his. We know that our old self was crucified with him in order that the body of sin might be brought to nothing, so that we would no longer be enslaved to sin. For one who has died has been set free from sin. Now if we have died with Christ, we believe that we will also live with him. We know that Christ, being raised from the dead, will never die again; death no longer has dominion over him.

For the death he died he died to sin, once for all, but the life he lives he lives to God. So you also must consider yourselves dead to sin and alive to God in Christ Jesus.
Let not sin therefore reign in your mortal body, to make you obey its passions. Do not present your members to sin as instruments for unrighteousness, but present yourselves to God as those who have been brought from death to life, and your members to God as instruments for righteousness. For sin will have no dominion over you, since you are not under law but under grace?

What is our attitude to be? Should we remain living under the authority of unrighteousness for grace to increase even more? No way! If our prior state of being under the authority of sin has passed away, how can we still live under that authority? Don’t you know that all of us who pledged our allegiance to Christ and have been made a new person spiritually, have also passed away from the authority of sin, as He did? Because of this pledge of allegiance, we have been spiritually renewed with Christ by the glory of the Father and we have been given a new identity and a new way to live with Jesus.