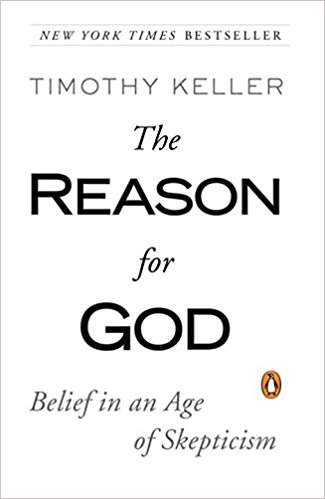 In The Reason for God: Belief in an Age of Skepticism

, Tim Keller, splits up the book in two parts. The first part, titled “The Leap of Doubt”, is Keller writing about the major challenges that bring on doubting God. Each chapter in “Part 1” is designated for a specific doubt. They are as follows “There Can’t Be Just One True Religion”, “How Could a Good God Allow Suffering?”, “Christianity Is a Straitjacket”, “The Church Is Responsible for So Much Injustice”, “How Can a Loving God Send People to Hell?”, “Science Has Disproved Christianity”, and “You Can’t Take the Bible Literally”. He not only names and talks about the points of view of each of the major doubts, but he has an apologetic rebuttal for each of them as well. Then in “Part 2: The Reasons for Faith”, Keller gives all the major reasons to believe in God, with each chapter focusing in on one. The chapters are titled “The Clues of God”, “The Knowledge of God”, “The Problem of Sin”, “Religion and the Gospel”, “The (True) Story of the Cross”, “The Reality of the Resurrection”, and “The Dance of God”. In these chapters, he not only explains the reasons to believe in God, but he lays out the basic beliefs and doctrines of Christianity. Lastly, Keller ends the book with an epilogue titled “Where Do We Go from Here?”, where he talks through the possible places skeptics may be at the end of the book and (as the title implies) how they might move forward.

In my opinion, the best quote of the book is:

“Jesus’s miracles in particular were never magic tricks, designed only to impress and coerce. You never see him say something like: ‘See that tree over there? Watch me make it burst into flames!’ Instead, he used miraculous power to heal the sick, feed the hungry, and raise the dead. Why? We modern people think of miracles as the suspension of the natural order, but Jesus meant them to be the restoration of the natural order. The Bible tells us that God did not originally make the world to have disease, hunger, and death in it. Jesus has come to redeem where it is wrong and heal the world where it is broken. His miracles are not just proofs that he has power but also wonderful foretastes of what he is going to do with that power. Jesus’s miracles are not just a challenge to our minds, but a promise to our hearts, that the world we all want is coming.” (pg. 99)

I chose this quote because I had never thought about Jesus’s miracles that way; with so much meaning and greater intention. I guess the only thought I had given to them was that they showed his amazing compassion and power, as the Son of God. I had also thought about what I would do if I could perform miracles. But I had never thought about it this way before, or even connected them to Jesus as redeeming the world and promising what is to come.

The one discovery from this book that stuck out the most is that serving God is very similar to serving your love-mate. Keller gave an example of this in the chapter “Religion and the Gospel”. He pointed out that you are already thinking of ways to serve your mate because of your love for them, and that is the same servant love we have for God. We are (or should be) thinking of ways to serve him naturally because we love him. That was another connection I had not made before.

There is so much from Keller’s book that can be personally applied for me. In summary, the things I took away from it is a deeper understanding of people’s points of views with their doubt, a deeper understanding of the Gospel, and a more intelligent and knowledgeable way to have conversations with skeptics. With the last once especially, I think I can have a conversation with a greater level of tact, understanding their point of view, and being able to respond in reasonable and thought provoking ways.

One thought on “The Reason for God”